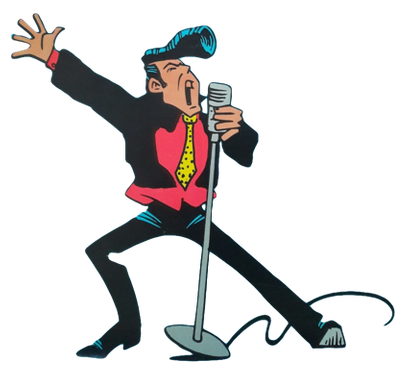 as no one thought.

appear and are played again and again at the popular cafes an in-places.

Even though we are in a new millennium, 50èr numbers still appear on the charts.

The numbers from Grease continue to make everyone break into song and party as no one thought.

Currently, Elvis is No. 1 in the United States, England and in other countries with the hit "A little less conversation" and many 50's numbers show up and will be played again and again at the popular city parties and festivals.

Therefore, everyone knows this genre that has been immortalized.

In the year 1994, the 50's showcasing the Scoops was formed with the great ally Daniel as the young Elvis.

The idea behind the band was to get the best show band in the country. And besides playing the original 50's Rock n 'Roll, getting

beyond the stage with a show so alive, that alone should be an experience for the wide audience to watch. The Scoops are today

Directly picked up with a time machine from the 50's with a bob hair brew cream, groundbreaker, gold slipper - Hound Dog, double

Everything is okay when The Scoops takes the stage. Even the singer's microphone is of the same model as The King "Elvis Presley"

used. In short: the style is laid.

The Scoops are characterized by their great joy, warmth, and love for the rock-roll, which they strive with such a style

enthusiasm and professionalism in their stage performance that they manage to grab the audience in a way that no-one else can.

It gives a great mood that makes it all to swinge.

The Scoops may be termed Denmark's hottest rock n roll band's Rock n 'Roll showband in addition to "push it off" at home, too

has been on international scenes in Germany, Sweden and most recently on their Tour to Austria.

In the last few years, at home there have been hundreds of concerts and performances in radio and television.

With The Scoops, an unforgettable trip back in time.